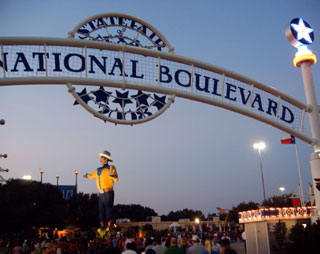 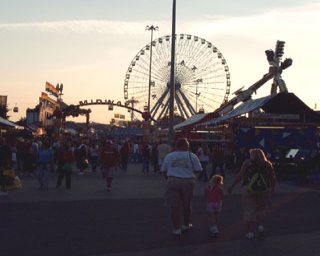 As this is our first time to the Texas State Fair, I didn't know just what to expect. Held yearly in October near downtown Dallas, we soon found our way among UT/OU fans who were also looking for parking places or leaving as the football game was held earlier in the day at the Cotton Bowl by the fair. After following the signs for many blocks, we turned in and paid $10 to park. As we arrived after 6 p.m., I expected the gate entry to be reduced but it was $14 a person (tip: bring a Dr. Pepper can and get half off). 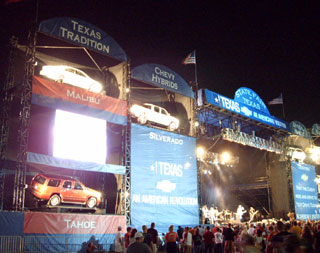 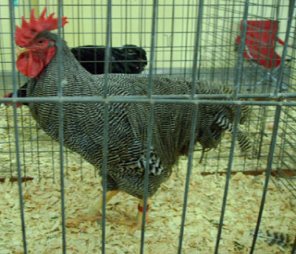 People were everywhere, along with the new cars on display, hot tubs, amusement rides, wine tastings, artwork, exhibits, livestock, and all types of food you could imagine. If it could be fried it was sold. Fried s'mores, fried banana split, fried grilled cheese sandwich, fried jelly belly beans, and of course fried okra. What we missed seeing that are staples with the Mississippi fair are free biscuits, catfish on a stick, kettle corn, roasted corn, cinammon rolls, elephant ears, and huge hamburgers. Also, the classic cars had already left for the day. With the Mississippi fair, they are indoors and can be seen as long as the fair is going.

We only got to see a quarter of the fair as we got tuckered out after walking for several hours. Huge is an understatement. Still, we enjoyed hearing Kevin Fowler once again, sampling the food, and walking through the exhibits.

Get like this Ultra-Lite Vest, plus other accessories
Copyright Southpoint.com 2009