This weekend I had a telephone conversation with Arthur La Salle, the longtime curator of Springfield Plantation, the oldest house in the Mississippi Valley. As the house was where the controversial marriage of Andrew Jackson (our 7th U.S. President) and Rachel Donelson took place, it is only fitting that I post this on President's Day as a tribute to "Old Hickory" and to Springfield Plantation. Andrew and Rachel loved each other dearly, though tragically she died before he was in office. Read about their great love story.

Known as being a little eccentric, mainly due to the fact that he is a walking encyclopedia of extensive historic knowledge, Mr. La Salle at now 78, and is still laboring on with keeping the house open. The visitiors have declined as a result of widespread media attention of New Orleans, even though the historic areas and the French Quarter where most tourists go are open for business as usual. I had last seen him some 12 years ago. He has devoted the past 31 years of his life to the preservation of Springfield Plantation in the hopes of future generations being able to enjoy. Besides writing a book, he also previously renovated Brush Hill plantation in Irwin, Pennsylvania, did railroad locomotive renovation, and has some interesting paintings displayed that he has painted over the years. On the National Register of Historic Places, the house was built with bricks made on the site for Thomas Green, Jr.
Springfield is considered one of the first houses in America ever built with a full colonnade across the entire front of the house.

Built in 1786-1791, Springfield Plantation is a treasue to behold, and worth the $10 per person admission to hear all about the fascinating history of the Mississippi Territory as you tour the whole house. This would also be a perfect field trip for school kids to learn history up close. The exterior looks the same as it did when built. The interior woodwork and hand-carved mantels from Virginia are all original. To give you a perspective of the fascinating history here, when Andrew Jackson married here, the house was in Spanish territory known as West Florida. If there are no others coming in for tours, Mr. La Salle may speak with you for hours about Springfield.
The house is the oldest major structure that survives in the whole Mississippi Valley, and also the very first two-story colonnade house to ever be built in the area. 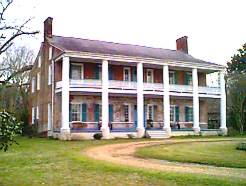 Consider making a donation to help ensure the house can stay open. If you happen to be near the Natchez area, be sure to stop in for a tour. Say hello to Mr. La Salle for me. His historic preservation efforts with Springfield Plantation are admirable and need the full support of anyone that cherishs history as I do.
See it soon while Mr. La Salle is still there. This is as authentic and original as it gets, and you'll be entertained for hours, and will be able to see, touch, and hear the most indepth about the area when it was still a frontier.
Tell him Southpoint.com sent you and you will never forget your visit.

Springfield Plantation is 24 miles from Natchez.
Exit off of the Natchez Trace at Milepost 20 (Fayette exit), turn right onto Hwy 553 and go a half mile till you see the entrance.
Tours are arranged by paying at the door.
Adults - $10
Children 12 and Under - $5
Hours are:
Monday - Saturday 9:30 a.m. till sunset
Sunday 10:00 a.m. till sunset
Google Maps | Mapquest Directions

If feeling adventurous while in the Natchez Trace area, drive through the ghost town of Rodney (the almost capital of Mississippi) and Windsor Ruins.