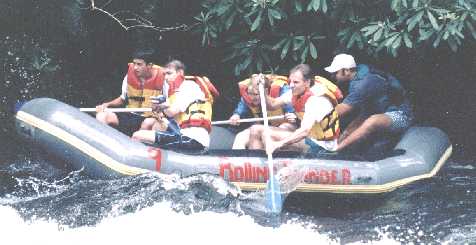 The water was COLD that day on the Nantahalia River. The whitewater in sections goes to a level 3 in difficulty. The river was used during the Olympics and is a favorite for kayakers. Our guide led us through all of the right places to avoid the rocks. At one place, we did a 360 degree spin in the water. Our guide calmly explained during the trip that only two people had drowned in the river, after getting their feet stuck in the rocks. The rafting company takes you from your car up to the drop-off point in old beat-up former school buses with the rafts roped to the top. Our driver gave us some early thrills as he missed more gears than he found. During our trip here, we stayed in Cherokee, North Carolina, with a drive to Cades Cove in Smoky Mountain National Park on the Tennessee side to view deer in the valley. If you go early in the day or late in the afternoon, take your camera, and expect to see quite a few deer and possibly a black bear or turkey.

Next: The Amish Country